Here’s a positive development in the pandemic: Two of North Texas’ largest hospital systems, Medical City Healthcare and Texas Health Resources, are resuming elective surgeries after voluntarily suspending them for about two weeks.

In early July, COVID-19 cases were spiking and the two systems wanted to preserve bed capacity, equipment and staffing so they could handle a potential surge in patients. Other local providers, including Baylor Scott & White and UT Southwestern Medical Center, did not suspend elective procedures, saying they had sufficient capacity to continue operating as they had been.

For much of the past week, the number of new daily COVID cases in Dallas-Fort Worth declined, a reversal in trend after Dallas County had reported over 1,000 new cases for 18 consecutive days. The growth in hospitalizations also slowed significantly.

But experts warned that major vulnerabilities still exist. The base of current COVID patients remains high, posing a serious risk if transmission rates were to rise again. And on Saturday, Dallas County reported 1,267 new coronavirus cases, a single-day high, along with 18 more deaths.

At Medical City hospitals, the number of COVID patients has declined by about 10% in the past two weeks, said Dr. Miguel Benet, chief medical officer. Over the same period, he said, the system has stabilized staffing through an influx of traveling nurses and other management tactics. The majority of nurses are working a normal number of shifts, he said.

In addition to last week’s decline in new cases, the positivity rate on tests has fallen a bit, and Benet credited the growing use of masks as the defining difference in the improvements.

“That’s what’s leading to the bending of the curve” in new cases, Benet said.

Social distancing, hand hygiene and avoiding large gatherings are important to slowing the spread of the disease, he said, “but the powerful one is masking.”

He cited studies in the U.S. and abroad, and local reductions in transmission rates since North Texas communities imposed mask mandates in public spaces. As many elected officials and businesses worry about a see-sawing economic recovery, he sees masks as the best near-term solution.

“They’re tied to our ability to have a functional economy and keep the spread down when people are out and about,” Benet said. “We should be wearing masks as widely as we can, because we know they work.”

At Texas Health Resources, the hospitalized patient population has been at a plateau since around July 7, said Kirk King, chief operations officer for hospitals. That was the day before Texas Health stopped taking reservations for elective procedures that could require an overnight stay.

“More North Texans have been complying with local orders and strong recommendations to wear masks, safely distance and frequently wash hands,” King wrote in an email.

Texas Health is continuing to closely monitor supplies of medications, ventilators and other critical-care equipment, he said, because there’s no assurance that COVID cases will remain flat or keep improving.

“It’s too difficult to predict with any level of certainty if that will continue,” King wrote.

In late June, as cases and hospitalizations were hitting new highs, Gov. Greg Abbott restricted elective surgeries in four large Texas counties, including Dallas. But the rule allowed providers to continue the procedures if they “would not deplete any hospital capacity needed to cope with the COVID-19 disaster.”

Elective surgeries are an important revenue source for hospitals, and even more so today. Many patients have been reluctant to seek care during the pandemic, and that’s driven down routine visits and even urgent visits.

UT Southwestern’s Basit said that more health systems are managing to handle elective work without affecting their ability to deal with a COVID outbreak. Patients who get elective surgery are not having much effect on transmission rates, he said.

And one of the biggest threats — that elective surgeries would consume too many masks, gowns and gloves needed for COVID care — has been greatly reduced by improvements in testing at the facilities.

In North Texas, most hospitals screen elective patients for COVID before procedures. Basit said the positivity rate has been “astronomically low” among those patients, which indicates a high level of caution and compliance.

At Medical City, over 20,000 patients and employees have received COVID tests, and Benet said two testing platforms produce rapid results — one in 15 minutes, the other in 45 minutes. More conventional COVID tests are producing results within 24 hours for Medical City patients, much faster than turnaround times for testing for the general public.

Medical City Dallas plans to set up a high-capacity, high-volume testing operation for the fall, because doctors are anticipating outbreaks of COVID and seasonal flu. That testing platform will support Medical City hospitals throughout the state, not just in Dallas-Fort Worth, Benet said.

“We’re preparing for an expected increase in testing for people coming into the hospitals,” he said.

Social distancing, wearing masks and other prevention techniques were about 63% effective at curbing the spread of COVID-19, according to UT Southwestern’s forecasting model released last week. That number is based on researchers looking back at the estimated impact of various measures.

At the current level of effectiveness, transmission would continue at a fairly high rate, and by October, Dallas County would be topping 2,000 new cases a day. If effectiveness were to improve slightly, to 65%, new cases would hold relatively steady and decline by late fall. Improve to 68%, and Dallas County would flatten the curve — adding just 100 to 200 cases a day by November, the forecast projects.

How tough would that be?

“It’s not that heavy of a lift,” Basit said. “More people have to take personal responsibility for their actions — wear masks, do hand hygiene, reduce contacts. It’s up to all of us to do the right thing and drive these numbers down.”

That’s the fastest way to open schools, revive the economy and reconnect with family and friends.

“These numbers will determine what’s possible,” Basit said. “Dr. (Anthony) Fauci put it well when he said the data and the virus will tell us what we can do.” 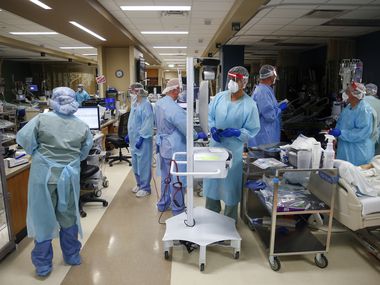